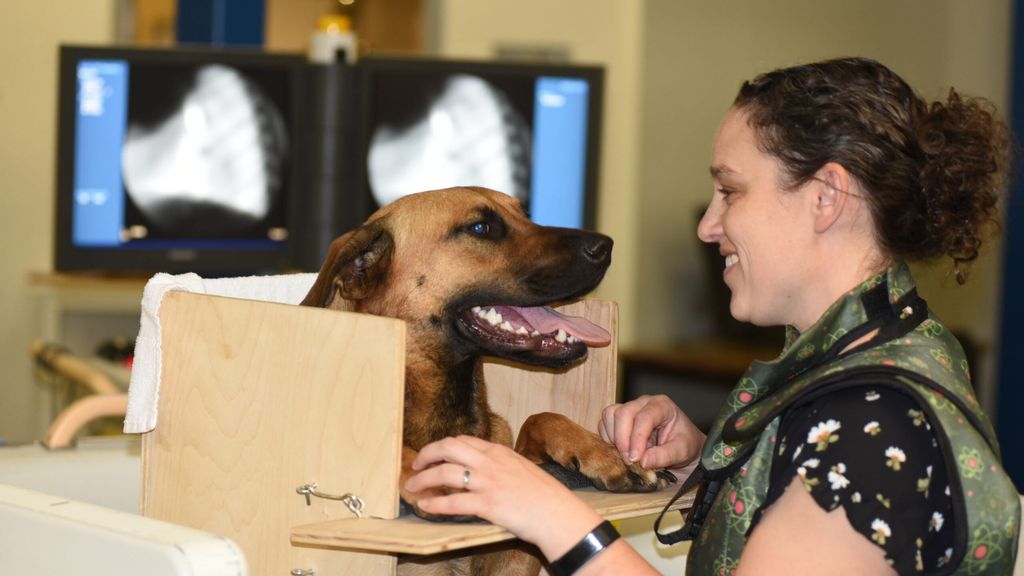 A rare disease afflicting dogs may now be treated with a “life changing and lifesaving” drug long used in humans but with an entirely different purpose.

Megaesophagus is a rare canine disorder in which the esophagus, or gullet, becomes enlarged and unable to move food down to the stomach. When food gets stuck in the lower esophagus and the condition is untreated, it can be regurgitated. Dogs may then aspirate food into their lungs, causing pneumonia.

“The literature tells us that many dogs with the disease die from aspiration pneumonia or are humanely euthanized due to poor quality of life within eight months of diagnosis,” said Jillian Haines, a veterinarian at Washington State University. She is known worldwide for her work on megaesophagus.

“We’re learning to manage the disease, and we’re adding on, in many cases, years to the time these animals get to spend here with their owners,” she said.

Haines and her colleagues conducted a study, appearing in the American Journal of Veterinary Research, in which they found that sildenafil, the generic version of Viagra, can be used to relax the smooth muscle lining the lower esophagus to release food into the stomach. The dogs in the experiment saw reduced symptoms and gained an average of more than 2 pounds by the study’s end.

The researchers found no side effects for dogs at the dosage they used. Sildenafil has long been used to treat erectile dysfunction, but it is also prescribed in humans and dogs to relieve elevated pulmonary blood pressure.

“Sildenafil is the first to target these mechanisms and reduce regurgitation, which is big because that’s what ultimately kills these dogs,” said Haines, referring to megaesophagus. The drug opens “the lower esophageal sphincter for 20 minutes to an hour,” Haines said, noting that this works well because the sphincter should only be open while the dogs are eating.

The team watched the dogs via videofluoroscopy, a moving X-ray examination, while the animals ingested first liquids and then blended wet food, watching it move down the esophagus. The 10 dogs in the study were given sildenafil or a placebo for two weeks at a time, followed by one week without sildenafil or the placebo. Then, the two groups were switched.

While the dogs’ owners logged episodes of regurgitation, the team did not tell them which drug had been administered. Although researchers found no significant difference between sildenafil and the placebo during the 30-minute videofluoroscopic examination, they did find that nine of the 10 owners reported fewer episodes of regurgitation during the two weeks that liquid sildenafil was administered.

“In many cases, the owners were able to figure out which drug was sildenafil because it was working,” Haines said. “Moderately affected dogs that were regurgitating frequently but not excessively seemed to see the most dramatic results.”

Following the experiment, Haines prescribed sildenafil to some of the dogs, which are still using it. However, dogs with severe symptoms did not show the same good results. Haines and her colleagues had difficulty getting the drug into these dogs’ stomachs for absorption.

Acknowledging that colleagues are asking about sildenafil, Haines said it “will be life changing and life-saving for a lot of dogs.”