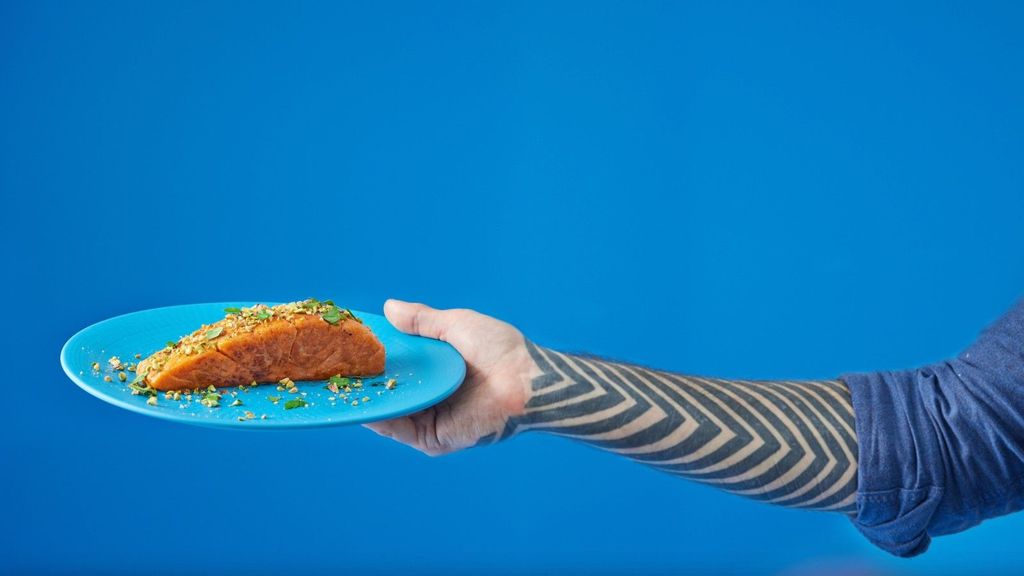 Get your vegan tartar sauce ready — the world’s first fully plant-based whole-cut salmon fillet could be on your fork in 2024.

This bold move from Israeli foodtech startup Plantish comes at a time when concerns about overfishing, antibiotics, hormones, mercury and microplastics are driving a worldwide wave of interest in plant-based and cultured alternatives to conventional fish.

This fillet is designed to contain the same protein, B vitamins and omega-3 and omega-6 fatty acids as real salmon but without toxins (or bones).

Cofounder and CEO Ofek Ron said the company’s purpose is “to save the oceans and eliminate the need to consume marine animals by providing more sustainable, more nutritious and more delicious fish options.”

“Delicious” is the operative word.

Plantish Salmon will catch on with consumers only if it tastes authentic. And that’s not simple to accomplish when the main ingredients are legume proteins and algae extracts.

“There are nearly endless opportunities to develop novel products that appeal to different markets around the world. But people will only buy them if they achieve taste and texture parity with conventional fish,” said Marika Azoff, corporate engagement specialist for the Good Food Institute (GFI), said in her recent state-of-the-industry report on alternative seafood.

“The challenges involve both taste and texture — the delicate texture of a flaky fish fillet, ‘oceany’ but not too fishy,” she explained.

If those challenges are met, plant-based and cultivated fish could benefit not only human health but also the health of the planet and its waterways.

Commercial fishing, and especially the habitat-destructive practice of bottom trawling, causes pollution and the loss of marine species and biodiversity.

Availability and cost are also attractive reasons to dock that fishing boat.

“The advantages of plant-based or cultivated fish include the ability to produce it anywhere, not just near sources of water, which also cuts costs and carbon footprint,” Azoff pointed out. “Production can be demand driven, reducing the huge issue of spoilage that the industry faces.”

Fish is catching up

Plant-based and cultivated meat and poultry companies are more plentiful and advanced than those dealing with fish alternatives. Israel boasts about a dozen companies in the alternative meat/poultry space, such as Redefine Meat and Aleph Farms.

Alternative fish, though still a very new and small sector, is swimming to catch up.

GFI stats show plant-based and cell-cultured seafood companies raised more than $80 million in 2020 (four times the amount raised in 2019), and in the first half of 2021 the number totaled $116 million.

In the United States, the most popular alternative fish products are analogs of white fish, crab, tuna and shrimp, according to GFI. Most of those products come in minced form, yet the main market opportunity is in whole-cut fish.

Salmon is the second most popular fish in America, after shrimp. Globally, salmon accounts for $50 billion of the $586 billion seafood market. But nobody has perfected whole-cut alternative salmon.

That is what Plantish aims to do, with the help of its scientists and Chef Nir Zook.

If successful, Plantish could claim a prominent place among the 60 or so plant-based and cultivated fish startups currently operating in the United States and Europe.

Cultivated fish, a fish-identical product made from fish cells under lab conditions, accounts for a minority of the 90 or so startups around the world that are working toward fish alternatives.

The post The World Is About To Get Its First Plant-Based Salmon Fillet appeared first on Zenger News.