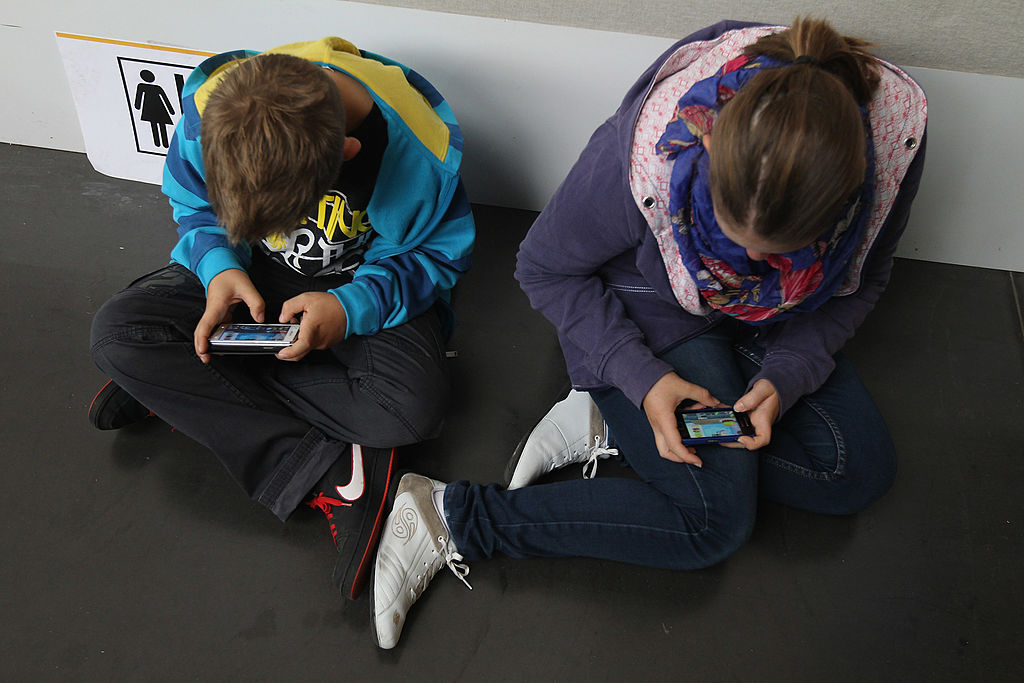 Half of parents are blind to how much screen time can damage their kids’ vision, according to new research.

They overlook simple steps to protect it – such as wearing blue-light blocking glasses and making their children play outdoors more.

Spending more hours on smartphones, tablets and other digital devices – and less time outdoors – is harmful.

Sarah Clark, a research scientist at the prestigious University of Michigan said: “Many parents may not be aware of both the short and long-term health issues linked to excessive screen time, including its effect on children’s eyes.

“Our findings suggest that some parents may have inaccurate perceptions of activities that affect their child’s eye health and vision and how to minimize risks.”

They were based on a nationally-representative survey of 2,002 parents of children aged three to 18 across the U.S. One in seven said their child has not had a vision test in two years.

In the U.K., primary schoolkids’ screen time soared during the pandemic. Six to ten year-old kids spent an hour and 23 minutes more a day looking at digital devices.

For 11 to 17-year-olds and under fives, it went up by 55 and 35 minutes, respectively. The phenomenon was linked to worsening eyesight.

Millions of students were forced to switch to remote learning, while social media use skyrocketed. The increases were leisure activities not related to work or study.

Ophthalmologists have warned of an epidemic of shortsightedness, or myopia, across the world. It can lead to more serious eye problems later in life.

The condition in children has increased dramatically in the past 30 years. Studies suggest outdoor time protects against it.

Clark said: “Parents should encourage at least one to two hours of outdoor time per day because exposure to natural light benefits eye development.

“Parents should enforce family rules to ensure children have a sustained period of non-screen time during the day.

“This is especially important during summer months when they’re off from school and may have less structured downtime.”

Some research has linked working up close – like reading or using a tablet – with shortsightedness.

Study consultant Olivia Killeen, also from the University of Michigan, said: “It is an important time to think about myopia risks for children because kids with this condition often become more nearsighted over time.

“The age of myopia onset is the most significant predictor of severe myopia later in life.”

Fewer than one in three parents polled said wearing sunglasses has a major impact. Just two in five have their child wear eyewear.

They reduce ultraviolet radiation damage which can contribute to eye problems in older age.

Clark explained: “While parents often make sure their children’s skin is protected with sunscreen, they may not think about protecting their eyes from the sun as well.”

Less than a third of parents said their child wears protective glasses or goggles during contact sports.

Clark recommends seeking advice from health providers for safe and comfortable eyewear for sports like lacrosse, tennis, baseball and softball and basketball.

Most parents said their children wear them for working with tools and playing shooting games like Nerf guns or paintball.

After time spent on screens, the most common factors they identified as impacting children’s vision and eye health are reading in poor light, sitting close to the TV or computer, diet and blue light from screens.

Clark said: “Some parents may still follow advice from past generations on protecting kids’ eyes.

“Reading in poor light or sitting close to the TV can cause eye fatigue or strain, but they will not do any permanent damage or long-term eye problems.”

Fewer than a third of parents said children wear glasses that block blue light that impacts circadian rhythms and makes it harder to fall asleep.

Clark said: “Children should get vision tests at least every two years to make sure eyes are developing properly.

“It’s important to identify and treat vision problems as early as possible, because undiagnosed issues can lead to serious eye conditions in the future, including permanent vision loss.”

Last year an analysis of the online habits of 60,000 families in the U.K. found website and app visits more than doubled in the pandemic – spurred by YouTube, TikTok, and BBC News.

Another study of more than 120,000 Chinese children found a threefold increase in shortsightedness among six to eight-year-olds in 2020 caused by being confined to their home with schoolwork delivered online.

Concern about excessive screen use extends beyond eyesight. The Millpond Sleep Clinic in London, in the U.K., reported a doubling in demand among children.

Parents say they cannot get them to sleep as they have busy brains at bedtime – fueled by screen time being one.

They also worry about the impact on children’s mental and emotional development.

The U.S. recommends no more than two hours of screen time a day for children aged two and older. The UK government has not advocated set time limits.