Nicholas Melillo Discovers The ‘Foundation’ For The Perfect Cigar 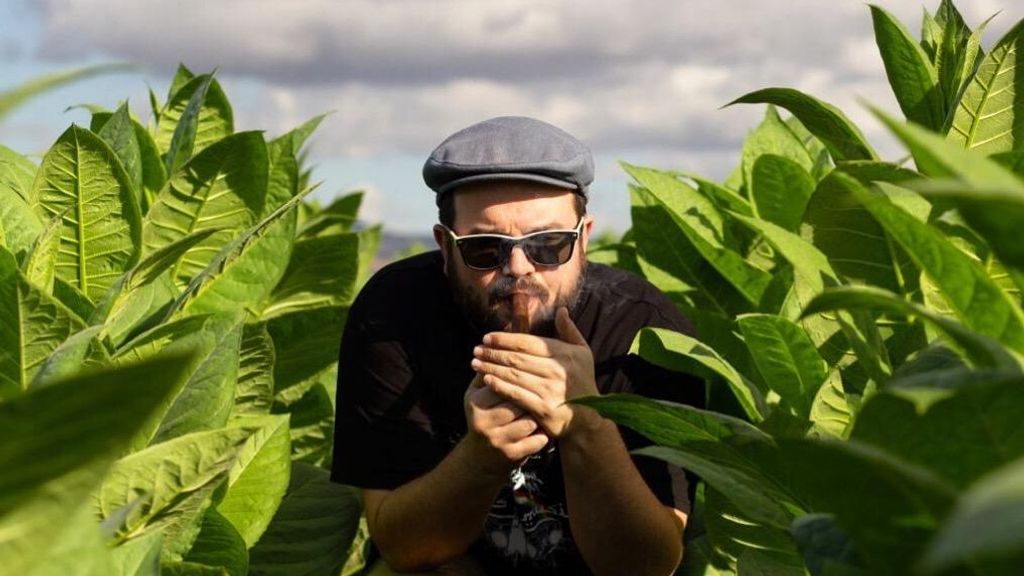 You would be hard-pressed to find anyone with more knowledge about tobacco, particularly cigars, than Foundation Cigars president Nicholas Melillo. A longtime smoker, Melillo knows exactly what he’s looking for when it comes to a premium stick.

His background in quality and consistency while working in a Nicaraguan factory paid dividends when he embarked on starting his own company in 2015. By 2020, Foundation Cigars was listed as the Number 3 cigar of the year by “Cigar Aficionado” magazine. That ranking and props from popular comedian, UFC commentator, podcast host and former “Fear Factor” host Joe Rogan helped further boost the brand’s popularity.

The Windsor, Connecticut-based company creates some of the top premium handmade cigars in the world, and Melillo continues his quest to educate potential customers about such products.

Zenger gets a master class in everything cigars from the head honcho of Foundation Cigars, who also explains the concepts behind some of his unique brands and blends, which range from Biblical figures to Bob Marley.

Zenger: Foundation Cigars is based out of Connecticut. Tell us about the location of the company.

Before the Communist regime of Fidel Castro took over Cuba 1959, Connecticut and that country had a really strong relationship. Cuba would send up filler tobacco for the inside of the cigar. And Connecticut would send down wrappers because that’s what we have been known for. When I started the company, I wanted to be sure to put our office here… our office is on a 100-acre farm in the River Valley.

Zenger: You started Foundation Cigars in 2015. Are you satisfied with its growth so far?

Melillo: I am, Percy. We have really been doing it in a way that focuses first and foremost on quality and consistency, because that’s what my background is. I used to run another company’s factory for 12 years. I moved to Nicaragua in 2003. At that time, it was the smallest factory in Nicaragua, and over 12 years, I helped build it into the largest cigar factory. Everything was handmade. We didn’t do anything with machines. I was in charge of 1,600 people, and we were making 105,000 handmade cigars a day. My main responsibilities were quality control, blending and tobacco purchasing.

My focus is always quality, being a cigar smoker myself. I know how important it is to get the right product into consumers’ hands. With that in mind, we started in 2015. I launched Foundation at the industry’s annual trade show, and man… the growth and the reception has been mind-blowing. I started the company a lot smaller than I originally expected. At first, I was looking at bringing on investors, and last minute decided to do it myself.

I left my previous job because I wanted to be my own boss. So, the idea of taking on investors was more daunting than actually working for somebody. Especially if you’re taking on investment money — I’m the kind of person that doesn’t like debt. I would spend my last breath trying to pay you back. I really wanted to do it all on my own. I started smaller but in hindsight, it was better to do it that way. The growth has been so organic from the beginning.

Zenger: Could you elaborate on the difference between hand-rolled cigars as opposed to machine-rolled ones?

Melillo: There is a tremendous difference, and we have been fighting this, especially educating the government and the FDA, because they have been trying to regulate us. The cigars you see in gas stations, convenient stores and so forth, those are all mechanized, those all use what we call homogenized tobacco, it’s not even tobacco, it’s basically tobacco dust that’s made into a paper. It’s made in huge machines that spread them out. The machines that are used to make cigars are high volume, very expensive, and the tobacco is just completely different.  You’re basically dealing with homogenized leaf which is tobacco dust and paper.

Whereas on the handmade side, we’re talking about some of the best tobaccos in the world. The growing in the fields and then the fermentation time, we’re talking about two to three years minimum before those handmade cigars are even rolled. We deal with a lot of what we call long filler, so it’s actually the whole leaf of tobacco, to where the machine-made market uses what we call short filler, which is basically diced up tobacco.

To give you a sense of the difference, the handmade market is such a small boutique industry amongst all these different tobacco products, the percentage of actual handmade cigar smokers is very tiny compared to machine-made cigars or other high volume tobacco products. To give you an idea, Nicaragua, Honduras and the Dominican Republic — which are the three largest areas for handmade cigars — produce about 300 million units annually, whereas the machine-made market is 13 billion.

The distribution channels are very different. There are probably 250,000 gas stations throughout the country, compared to about 2,500 cigar shops. A very small percentage of the nation enjoys handmade cigars. It’s a much different experience as far as the custom of smoking cigarettes. Those type of tobacco products are more like a nicotine delivery. You get off a plane and need to smoke a cigarette. With cigars, it’s more of a ceremony. The custom of sitting, cutting, lighting, the comradery, it’s very much like a modern-day ritual in many aspects. This is what we have been going through with the FDA. We are trying to show them that kids and younger people don’t really smoke our products, and that the price point and act of smoking hand-rolled cigars are so different from machine-rolled ones.

Zenger: How major was it for Foundation Cigars to receive a shout-out from Joe Rogan?

Melillo: Mind blowing! I’ve listened to Joe for many years, so to see him get into enjoying cigars, and to get a shout-out from him… I ended up making him his own cigar. It was super cool, man. A real honor.

Zenger: Another milestone for the company, in 2020, Cigar Aficionado listed Foundation as a Top 25 cigar.

Melillo: In the ’90s when I first started working in cigar shops, the internet was just starting, and there was no social media. The only media where you could find out about cigars was “Cigar Aficionado,” so personally that magazine meant a lot to me. We ended up getting Number 3 Cigar of the Year. It was huge! Definitely one of the top honors of my career. It really helped expose Foundation to a wider array of cigar smokers. It was a huge honor.

Zenger: Your David & Goliath Tabernacle is a very good smoke. What’s the backstory of that particular cigar?

Melillo: The concept of the brand follows my Tabernacle brand. I mentioned this battle we have been going through with the FDA. You could imagine the influence of big tobacco and how they have influence over legislative proceedings and the FDA, so it felt like that battle of David & Goliath. Goliath being big tobacco, the government, and the handmade cigar being David.

I thought it was appropriate for the time. It really fit nicely with my brand called The Tabernacle. The sizes of those two cigars are called Perfectos. Which is a really old-school shape where both ends are kind of pointed. That shape was one of the classic shapes from Connecticut back in the early 1900s. For both David & Goliath, we use the outside wrapper, we make one that is Connecticut broad leaf wrapper, right from the valley, and the newer David & Goliath is a Havana seed, which is a Cuban seed that’s grown in the Connecticut River Valley. That seed is very unique. It’s a special blend, a special project, and that’s one of my favorite daily morning smokes.

Zenger: You say the leaf is the true foundation for a perfect cigar. I’m sure that makes the selection of the leaf a strenuous process for you.

Melillo: Yeah, man! It’s the quality, the consistency of the leaf that you’re putting into your blend. I have been fortunate to work with so many amazing legends in the cigar world, so I’ve been able to learn what we call black tobacco, which is cigar tobacco. I’ve been exposed to the best leaf that you can buy in the world as far as cigars go. I’ve also been fortunate to learn the fermentation process.

I always compare it to my grandmother and great-grandmother’s pasta sauce. My family is Italian, so pasta sauce is a very serious thing. It’s the difference between grabbing a can, popping it open and throwing it on the stove, compared to my grandmother, who used fresh ingredients, fresh tomatoes and low heat over eight hours. What does that do? Once you turn up the heat, Percy, you start losing some of the goodness within the leaf to the elements. The heat actually starts dissipating a lot of the goodness — the oils and essential flavors. It really is slow and steady. It’s like the pasta sauce; the same is true for tobacco fermentation — you have to have time, you have to have patience, and you have to be able to cure it at low temperatures over a long period of time.

That’s where it gets difficult. You’re talking two to three years, sometimes longer, until you’re turning that leaf into a sellable product. That takes a lot of resources. A lot of times things are rushed. You can cure tobacco really fast by bringing up the natural fermentation heats fast, and you can do it quick. But the real way to do it is slow and steady. That preserves the essential oils in the leaf and the flavor. The proof is in the pudding in the blends and the quality of cigars.

Zenger: The Upsetter is another interesting concept you came up with. Could you elaborate?

Melillo: I started smoking cigars in ’96. At that point, Jamaica was making some of the best cigars in the world. A very infamous brand called Macanudo, was made in Kingston, Jamaica. Near there, you have an area called May Pen, which is the main tobacco growing region. They were making a brand there called Royal Jamaica. At the same time in ’96, I was really falling in love with Reggae music. Once I heard Bob Marley, it just opened these doors. I started looking at life so differently. I started really seeing how everything is interconnected. I’m getting into the roots of Reggae. My love never stopped.

So, about five years ago I was working on starting the company, and I realized that a few days earlier would have been Bob Marley’s 70th birthday. So, I flew from Nicaragua to Kingston with no plans. Just showed up at the family’s house. There was a huge party for his 70th, which I had no idea was going down. I ended up hanging out with Lennox Lewis all day, and some of Bob’s kids. It was amazing.

At the end of the night, everybody was cleaning up, and I saw a gentleman pull a leaf of tobacco out to roll up a spliff. It was a whole leaf and I asked him where he got it from. Long story short, I spent the next week going up into the mountains, going to May Pen, and sourcing… Jamaican Cow Tongue because of the shape. I ended up sourcing that and always wanted to make a brand to pay homage to reggae, ska and rock steady music. The Upsetter cigar is based on the producer, Lee “Scratch” Perry, who passed away earlier this year. He was known as “The Upsetter,” and was one of the originators of dub music.

Edited by Matthew B. Hall and Judith Isacoff

The post Nicholas Melillo Discovers The ‘Foundation’ For The Perfect Cigar  appeared first on Zenger News.