Museum’s ‘Reckoning With Remembrance’ Preserves The Memory Of Emmett Till 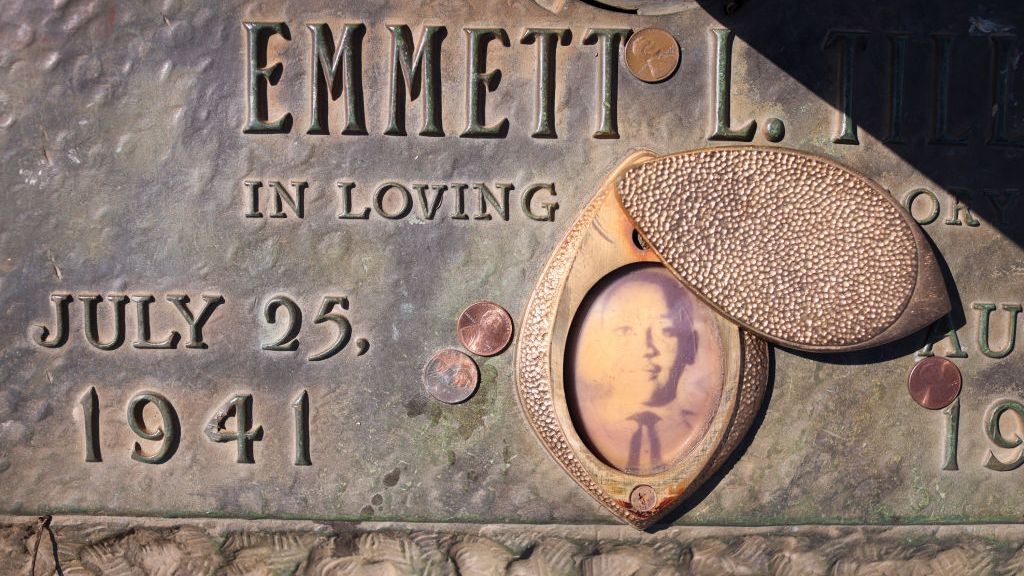 WASHINGTON — In the middle of the night on Aug. 28, 1955, 14-year old Emmett Till was snatched from his great uncle’s home in Drew, Mississippi, deep in the river delta, by the enraged husband of the white woman Till was accused of offending a few days earlier. The husband and his brother beat and tortured Till and shot him in the head. Then they tied his body with barbed wire to a 75-pound cotton gin fan and threw him into the Tallahatchee River.

Till’s body was returned to Chicago, where his mother insisted on an open casket to show the world what had been done to her son. The two men accused of killing Till were acquitted by an all-white jury in September 1955.

That casket, displayed at the Smithsonian’s Museum of African American History and Culture in Washington, D.C., has been viewed by thousands. Starting this week, a display at the National Museum of American History will preserve Till’s story in another way.

The bullet-ridden sign that was placed by the Tallahatchie River in remembrance of Emmett Till will be on a monthlong display from Sept. 3. The sign, several iterations of which were defaced over the years, stands in a place of prominence in Flag Hall at the entrance to the National Museum of American History.

“The Till sign works to preserve the memory of an African American boy’s murder while demonstrating the ongoing nature of anti-Black violence in America,” the museum stated.

The sign was erected by the Emmett Till Memorial Commission, part of the Mississippi Civil Rights Project. The nonprofit erected nine markers in 2018 to commemorate TilI along the banks of the river where his body was found. The signs have been stolen, riddled with bullets or thrown into the river.

“These signs were part of a longstanding history that has intentionally been suppressed and in some ways attacked. The community has shown its resilience in erecting a new sign every time it is shot up,” said Tsione Wolde-Michael, the Smithsonian’s curator for African American Social Justice.

In the summer of 2019, the third bullet-riddled sign was replaced by a heavier bulletproof sign protected by a fence and security cameras. Three members of a fraternity at the University of Mississippi were photographed that year holding guns in front of an Emmett Till memorial marker with bullet holes visible.

Wolde-Michael said she and a group of historians traveled across Mississippi in 2019 to learn what happened to the Emmett Till memorial sign. She said the response to a potential national exhibit was positive. “This is about establishing long-term relationships in the community. This is just the beginning,” she said.

Patrick Weems, executive director of the Emmett Till Interpretive Center in Money, Mississippi, which is about 30 miles from Drew, said: “The citizens of Tallahatchie County have struggled to keep Till’s memory on the physical and cultural landscape. We are honored that the Smithsonian has taken an interest in this important American story.”

There are 317 bullet holes on the sign displayed at the museum — the second of four signs placed at the Tallahatchee River. This particular sign was donated to the Smithsonian.

“The Emmett Till Memorial Commission has been working for 15 years to change the physical and cultural landscape of Tallahatchie County, Mississippi, and the road to remember has not been easy,” said Weems. “So it is with great appreciation that we are partnering with the Smithsonian to honor and remember Emmett Till and the struggle that our community has faced to commemorate his life and legacy.”

A panel discussion is scheduled for Thursday at the National Museum of American History on “The Long Battle: The Work of Preserving Emmett Till’s History.” Participants include the Rev. Wheeler Parker, Till’s cousin, Tallahatchee community leaders and Till scholar Dave Tell of the University of Kansas.

The discussion will be recorded and featured on YouTube beginning Friday.

The original glass-topped casket that held Till’s body and images of his open casket funeral that were published in Jet magazine in 1955 are on display in the “Defending Freedom, Defining Freedom” exhibition at the National Museum of African American History and Culture.

Till’s memory is honored by individuals, as well as institutions.

During the “March On for Voting Rights” rally in Washington on Aug. 28, Martin Luther King Jr.’s granddaughter, Yolanda Rene King, 13, spoke to the crowd and asked for a moment of silence to honor the slain teen.
Edited by Judith Isacoff and Fern Siegel

The post Museum’s ‘Reckoning With Remembrance’ Preserves The Memory Of Emmett Till  appeared first on Zenger News.