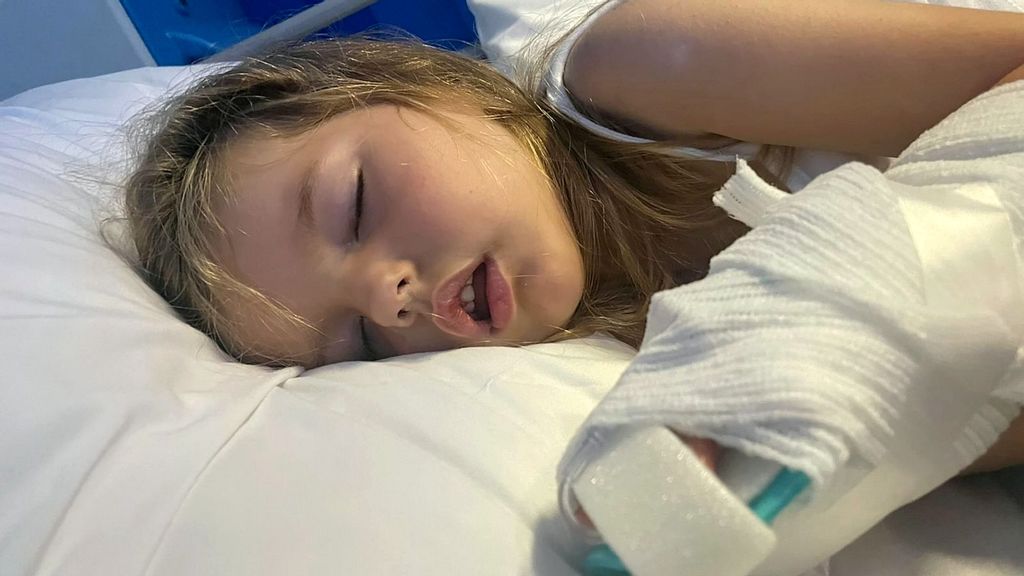 An English mother fears her young daughter may be wheelchair-bound for life due to a condition doctors can’t diagnose – because so many hospital appointments were canceled due to COVID.

Rachael Swadling, 25, was induced into labor at 28 weeks after a serious heart condition was discovered halfway through her pregnancy with daughter Hallie Spree, in 2019.

Hours after she was born on March 19, 2019, the baby underwent an operation at King’s College Hospital in London, the United Kingdom’s capital, to remedy an artery defect.

But a month after being discharged, Swadling, from Gillingham, Kent, in the U.K., took Spree to her to Medway Maritime Hospital with breathing difficulties.

It was discovered Spree had a bad chest infection.

It has since been discovered the youngster has congenital muscular dystrophy, a genetic condition which affects muscle strength and tone.

She also had other ailments such as a toe deformity and ankle weakness, which means they may be inward and lead to injuries.

Some infections needed more intervention by Medway, which sometimes resulted in hospitalization.

In August 2020, Swadling said an appointment at the Evelina Children’s Hospital in London was scrapped because of COVID.

She explained: “We were meant to see Evelina hospital to check in with her heart.

“But due to COVID it was canceled – alongside many other appointments that were then made into telephone or zoom consultations.

“I tried to explain that it wouldn’t be enough for them to see how difficult she finds things on a screen. Sitting and talking, she is fine, so they would think there was no problem.”

Alarm bells rang after she had a fall in March last year and Swadling noticed that Spree had been experiencing loss of head and neck control.

She said: “At first, Hallie was able to get into a crawling position with her head flopping, she was able to stand holding one of hands, was able to do a few steps independently.

“But at around 18 months old Hallie’s mobility had started to deteriorate and she was less and less able to take steps.”

She claims they weren’t able to get a face-to-face appointment at Evelina Hospital until after her second birthday.

She was given a walking frame to assist her mobility.

The worried mom said up until then she had no reason to think anything was wrong.

But by July, Swadling could see her condition deteriorating as she struggled to keep her knees from buckling and ankles cracking.

She said: “She started off beautifully, but now I could see she was going backwards rather than forwards. I was tearing my hair out.

“I was begging somebody to see my little girl. I was pleading with doctors she needs help.”

Swadling claims that after “no help from Evelina,” she ended up instead taking the girl to Snapdragons Children’s Center in nearby Strood, via their general practitioner.

Snapdragons was able to get her treatment from a physiotherapist, and she uses a hydrotherapy pool to ease her muscles.

Swadling said: “Ellie has been terrific in helping us find was to help Hallie move around independently.

“They have been marvelous at Snapdragons. They were the first to tell me that my daughter was disabled and helped us find more suitable accommodation.”

But she still wonders what might have happened had she been able to get treatment sooner.

Referring to her daughter’s treatment at Evelina, Swadling said: “I felt disgusted at the way I was being dismissed.

“These were not routine check-ups like you get normally after having a baby, but vital appointments as far as I am concerned.

“There is no doubt if my daughter had been seen sooner, we would not be in this situation.

“In her latest list she has 10 conditions and this keeps growing.

“This is my daughter we are talking about and I want answers. I don’t want big words thrown at me which I then have to research and Google which can be scary.

“I feel the NHS has let us down. Who knows if they had seen Hallie earlier she might not be in the position she is now?

“And we still don’t know what’s wrong with her. It’s breaking my heart.”

Swadling is now in the process of drafting a formal complaint.

She said: “I believe it was very important those appointments should have been kept at what could have proved a crucial time.

“Hallie is now unable to weight bear and her toe deformity is still an issue as well as her ankle strength.

“One doctor Hallie had seen is concerned she could dislocate her hips with her ankles rolling.

“I don’t know to this day that Hallie might have to spend the rest of her life in a wheelchair. At the moment I am her arms and legs.

“My poor girl spends most of her time laying on the floor as she struggles to sit up by herself for a long period of time.

“It’s all very difficult for us as a family.”

She added: “There could be other parents struggling with the same thing in total silence.”

An Evelina Hospital spokesman said: “We are very sorry for the delay to Hallie’s first appointment which was due to COVID-19 pressures. She has now been fully reviewed and we will work with her family on the best way to manage her condition.”