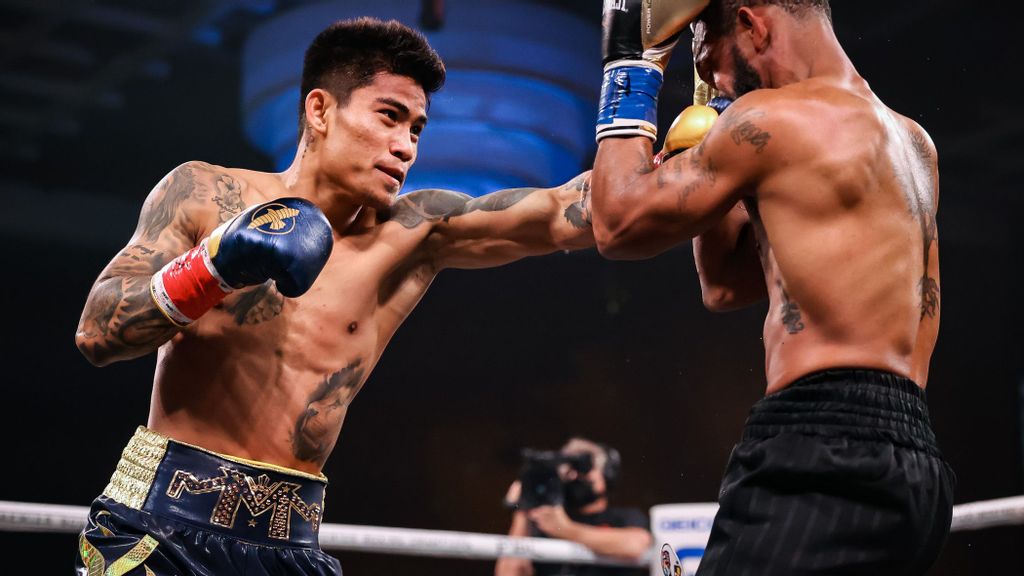 Mark Magsayo admired Manny Pacquiao as a youngster growing up in the Philippines, and upon signing “Magnifico” in 2020, “The Pac Man” said Magsayo “Reminds me of myself.”

Judges Mark Cosentino and Henry Grant scored it for Magsayo 115–113, while Lynne Carter had it 114–114 as did Zenger. Magsayo’s victory came 27 years to the day from Pacquiao’s 106-pound professional debut, a four-round unanimous decision over Edmund Enting Ignacio on Jan. 22, 1995.

“This was my dream, and my dream has come true,” said Magsayo, whom Pacquiao signed to a promotional contract in advance of his 10-round split-decision victory over southpaw Rigoberto Hermosillo in October 2020.

“I decided to turn pro because I wanted to be a world champion like Manny Pacquiao. I want to be like my hero and inspire kids like he did me. I’m so proud to be a champion from the Philippines, and I’m thankful for the support of my Filipino fans.”

Magsayo received a congratulatory message on Twitter from Pacquiao (62–8–2, 39 KOs), who retired as an eight-division title winner in August after falling to Yordenis Ugas. Pacquiao is the oldest man to win a welterweight title, which he did in July 2019 with a one-knockdown, unanimous decision over previously unbeaten WBA titleholder Keith Thurman.

“Congratulations @MarkMagsayo_MMM on your first world championship,” Pacquiao wrote. “Thank you for bringing honor to our country by becoming the latest Filipino world champion. Welcome to the club.”

“’Welcome to the Club’? That means a lot to me to be in the club, and now, I’m a Filipino champion joining Manny Pacquiao, Nonito Donaire and Jerwin Ancajas,” Magsayo told Zenger during a phone call early Sunday morning.

“This fight was a big challenge and I felt a lot of pressure about the decision because I had asked for the Gary Russell fight, and I got it, and it went to the cards. But felt that I deserved to win because I was the one applying the pressure.”

Fighting largely one-handed minus his jab due to an injured right shoulder, Russell ended a 23-month ring absence, doing so for the first time without his father and trainer, Gary Sr., in his corner following a foot amputation stemming from Type 2 diabetes. Russell was also in action for the first time since the December 2020 death of 26-year-old brother, Gary “Boosa” Darreke, from a heart attack.

Russell’s title as boxing’s longest reigning champion ended at six years, 302-days with Gary Sr. watching from ringside in a wheelchair as Magsayo out-landed his son, 150–69 in overall punches and 140–58 in power shots while trailing in jabs, 11–10.

“I injured my shoulder about two weeks ago in training camp. I believe that I have a torn tendon in my right shoulder,” said Russell, who required an hour to lose a half pound (125.5) at Friday’s weigh-in. “I haven’t competed in almost two years. This is what true champions do. I wanted to step into the ring and display my superiority regardless of the injury and whatnot. We did that.”

Magsayo had advantages in height (5-foot-6 &half; to 5-foot-4 &half;) and reach (67 &half; to 64 inches) over Russell, and was advised by trainer Freddie Roach to fight from a distance despite being aware of the Capitol Heights, Maryland, fighter’s injury as early as the fourth round.

“I hit him in the [fourth] round with a good shot, so that’s when he got hurt. That was a big advantage and an opportunity for me,” said Magsayo, who was most effective with right uppercuts and crosses to the head and body.

”Since he couldn’t use his jab and was getting hit a lot, Coach Freddie and [assistant] coach Marvin [Somodio] told me to just throw good combinations and to follow through and this is how you’ll become a world champion.”

Magsayo dropped to his knees and thrust both hands skyward when the scores were announced.

“I was surprised that there were a lot of Filipino fans there who came from Brooklyn, New York, New Jersey and Chicago,” Magsayo told Zenger. “Now that I know that they’re here, I feel like I’m in heaven because they made me feel like I was fighting at home.”

Russell was nevertheless elusive throughout the eight rounds during which he was hampered, occasionally swiveling Magsayo’s head with pinpoint left hands, knocking him off balance and winning the final round on all three judges’ cards.

“I believe that I have a torn tendon in my right shoulder. I refused to postpone this fight and push it back. I gave him a boxing lesson the whole way through. I landed cleanly whenever I wanted to,” said Russell.

“I couldn’t use my right arm, yet I was still able to throw effective shots and touch him at will. I was itching to get back in the ring and compete. I believe in my skill set and what I bring into the ring. I feel like I still won the fight.”

Russell is 7–1 (4 KOs) since June 2014, when he lost by majority decision to three-division champion Vasyl Lomachenko. “Mr.” Russell’s run included knockouts of current or former champions Jhonny Gonzalez (March 2015), Oscar Escandon (May 2017) and Kiko Martinez (May 2019) in the fourth, seventh and fifth rounds, and a unanimous decision over previously unbeaten champion Joseph Diaz (May 2018).

In his previous fight in February 2020, Russell successfully defended his crown for the fifth time by unanimous decision over Mongolia’s Tugstsogt Nyambayar, who entered at 11–0 (9 KOs).

“I refuse to not compete and to display my skills to my fans and the people who came out to show support and love. Please believe that I will be back. I still want these fights. I’m about to get my shoulder fixed and be back at it,” said Russell.

“I fought with one arm. He had his hands full with a fighter with one arm the whole fight. I gave him a boxing lesson. Will he want a rematch? That’s the question. I want the rematch.”