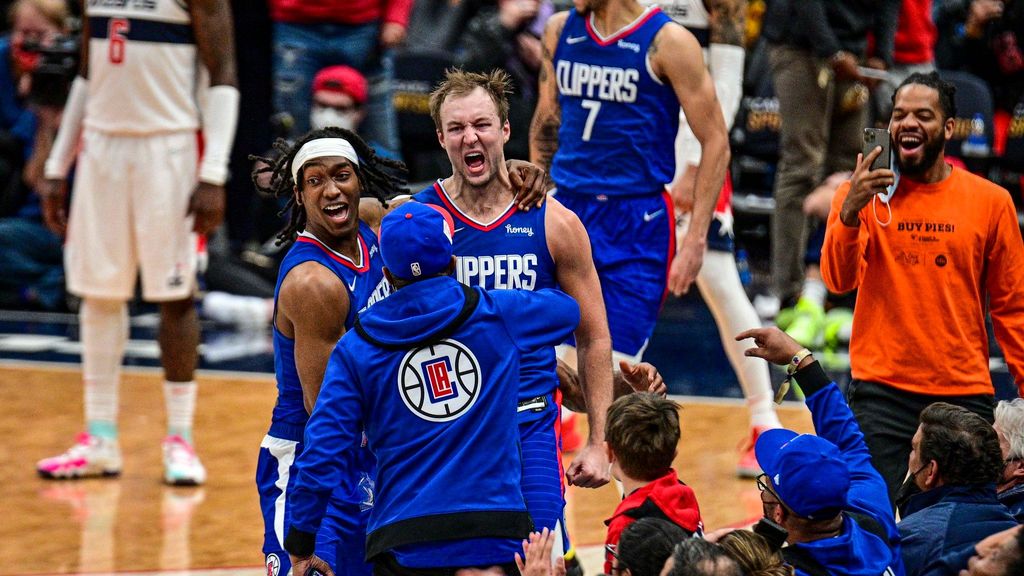 There’s not much of a better way to enter a three-point contest at NBA All-Star Weekend than by canning eight triples to put a bow on the first half of your season in winning fashion, and Los Angeles Clippers sharpshooter Luke Kennard did just that.

Better yet, Kennard carried that momentum into a first-round high score of 28 in the competition, making it into the top-three. Unfortunately, Karl-Anthony Towns shocked the world and oddsmakers with a blistering 29 to defeat Kennard and Trae Young’s 26 for the shooting crown, but there was a silver lining.

About three hours northeast of his hometown of Middletown, Kennard’s family and friends were watching it all happen live at Rocket Mortgage FieldHouse in downtown Cleveland.

“It means everything man. Just being from Ohio, hearing that the All-Star Game was gonna be back in Ohio, I wanted to be here So getting the invite meant a lot,” Kennard told BasketballNews.com at Mountain Dew and Ruffles’ The Block event prior to All-Star Saturday.

“I had a lot of family and friends come in. Just to be around the city, I know a couple that [weren’t even able] to be there and said ticket [prices] were crazy. Just being around the city and enjoying the experience. It means a lot. The goal is to represent Clipper Nation. Just have fun with it, enjoy the weekend.”

Luke Kennard got HOT in the first round, finishing with a score of 28

A super standout at Franklin High School from 2011 to 2015, Kennard’s claim to fame — at the time and still to this day — was surpassing LeBron James’ career scoring record at Saint Vincent-St. Mary’s. In his four seasons with the Wildcats, Kennard recorded a total of 2,977 points to LeBron’s 2,646 with the Irish. (He currently sits second in Ohio high school history behind former Ohio State sniper Jon Diebler, and holds the record for the most made free throws in a career with 760.)

So in addition to having familiar faces in the audience cheering him on, sharing the festivities with another Ohio high school legend in LeBron at an All-Star weekend in their home state was “awesome” for the 25-year-old.

“He’s done so much for the state of Ohio, especially where he came from and his city [of Akron]. It’s really cool,” Kennard said. “He’s a Northern Ohio-ish kinda guy, I’m Southern Ohio, so together we’ve done a lot. Ohio means everything to us. It’s where we’re from. We never forget where we came from. So it’s pretty special. And to be back here together, enjoying this weekend, it’s a lot of fun.”

Topping that sort of record held by as iconic of a name of The King, it’s no wonder that Duke University came calling. Kennard spent two years playing for the Blue Devils, finding his footing as a sophomore as the team’s top option alongside Jayson Tatum, Grayson Allen and Frank Jackson. He averaged 19.5 points, 5.1 rebounds and 2.5 assists per game that season, playing with more efficiency and comfortability than he did as a freshman.

Having learned under the tutelage of the legendary Mike Krzyzewski in Durham, NC, Kennard believes he owes a debt of gratitude to the soon-to-be retiree, and notes that Coach K stays in contact with him almost daily.

“He meant a lot [to my career]. Coach, he gave me an opportunity to play at the best university in the world, play for the best coach to ever coach the game. It was a lot of fun. I mean without going there, [there’s] no way I would be where I am today,” Kennard said. “He’s great. He’s such a family guy. Anytime I have a big game, he’s always texting me like after the game. He keeps in touch with a lot of his players. I’m happy for him.

“He’s done everything he’s wanted to do while coaching the game. There’s no better guy or coach for everything that’s happened to him — he deserved it all. Happy retirement to him. He’s gonna enjoy it now, he’s gonna enjoy his family and grandkids. I’m happy for him though. I keep in touch with him all the time, and hopefully they can go out with a bang and try to get him a national championship this year. It’s been fun to watch.”

Nowadays, Kennard is in the midst of his fifth NBA campaign and his second with the Clippers. Year 2 in L.A. has brought on a more significant role for the sniping swingman, as he’s producing to the tune of 11.8 points per contest on 61.6% True Shooting in a hair under 28 minutes per night. On the surface, you’ll see nearly the exact same perimeter percentage (∼45%) in back-to-back seasons; however, the freedom in which Kennard is firing these treys off is much different.

Take a more specific dive into his touch-time data, and you’ll find that he’s launching from distance almost right upon the catch without hesitation. This season, Kennard has taken 263 threes with less than 2 seconds of touch time and made 45.6% of those attempts, well on track to double last season’s output (177) as a whole. Kennard’s also had games where he’s gone for it early in the shot clock more often, meaning he’s being put in great positions by Clippers head coach Tyronn Lue and his players to hoist off of screens and handoffs.

“It’s just the people around me. The people around me building that confidence in me and just putting that trust in me to take those shots,” Kennard said. “I think last year, like in the offseason, I worked on shooting difficult shots, like coming off screens… When you’re considered one of the elite shooters in the NBA, you attract a lot of attention. Guys don’t like to leave you that much. So credit to T-Lue for putting me in positions to get open and my teammates for finding me when I’m open and when I have that little amount of time and space.

Kennard didn’t stop there with his praise for Lue, who has guided L.A. to a 30-31 record in spite of missing Kawhi Leonard all year and Paul George for over half of the season.

“He’s great. He’s a players’ coach man. He knows how to coach the game. He’s one of the best coaches in the NBA. I love playing for him,” Kennard said. “He really builds a level of confidence in his players. My role’s definitely bigger this year than it was last year. We have dealt with some injuries, but at the same time, we’ve won 30 games this year. We’ve lost some really close games that we should’ve won. And with what we did in the playoffs last year, being down 2-0 in a few series, it speaks a lot about what kinda coach he is and how much trust we put into him.

“I love being around him, love playing for him. So he’s built a lot of confidence in me, and just allows us to play and be free and be who we are. It’s been a lot of fun.”

Reggie Jackson has had a lot to do with Kennard’s shooting successes as well. The veteran point guard has the most passes to Kennard on the team currently, and the quick trigger man has nailed a blistering 58.7% of those attempts from downtown. Whether it be looking up in transition, bulleting the ball over after an Ivica Zubac high screen or slinging it to the outside following a drive, they have hooked up 29 times thus far.

Maybe it’s the synergy between the two from their time spend together in Detroit, or perhaps it’s the lighthearted, supportive nature of Jackson that has everybody not only self-assured, but also loose.

“Reggie, he’s one of our vocal leaders. He’s always talking to us, always has a smile on his face. He lightens up the room. He’s great man. He’s one of your biggest hype [men] you can get,” Kennard said. “You could probably look up a lot of postgame interviews with other guys and Reggie’s in the background dancing or doing something crazy.

“But we love Reggie. He loves being in L.A. He has a lot of friends there. Him and PG are really good friends. So they enjoy each other. Reggie’s great. I played with him in Detroit, I mean, that was my vet. So I’ve known him for a while now since I’ve been in the league and just to be back on a team with him is awesome. He gets us going though. He’s a great player and he’s had a really good year so far, so I’m happy for ’em.”

We’ve found out a lot about this particular Clippers group this season. While a ton of the attention this team is getting has to do with the future and what could happen when the roster is at full strength with PG and Kawhi, L.A. is showing an admirable amount of resiliency in the here and now.

“We’ve got a really good team. Obviously when we get guys like PG, Kawhi, Norman Powell — whenever those guys come back, that’s just gonna take us up to an entirely different level, a scary level honestly,” Kennard said. ‘We have a really good group, we’ve won a lot of games so far, we’re in that fight for the playoffs. Right now, we’re in the Play-In area, but we told each other after our last game before the break: ‘We want to hit the ground running when we come back. We want to be ready to go. We want to start winning more games.’ And that’s our goal.

“We want to continue to build what we have going on, just trusting in each other, trusting what the coaches are doing, but have fun with it as well. It’s been a good year… It’s been up and down. It’s been a weird year — like the COVID situation [where] guys have been out — but we’ve fought through it and guys have stepped up big and had big moments for us. So it’s exciting to be a part of a team that loves winning and expects to win.”

It’s fun to think about the future, but the Clippers don’t plan on looking ahead anytime soon.

They’re gonna make you earn it.

The post Luke Kennard Letting It Fly With A Quicker Trigger For Game Clippers appeared first on Zenger News.