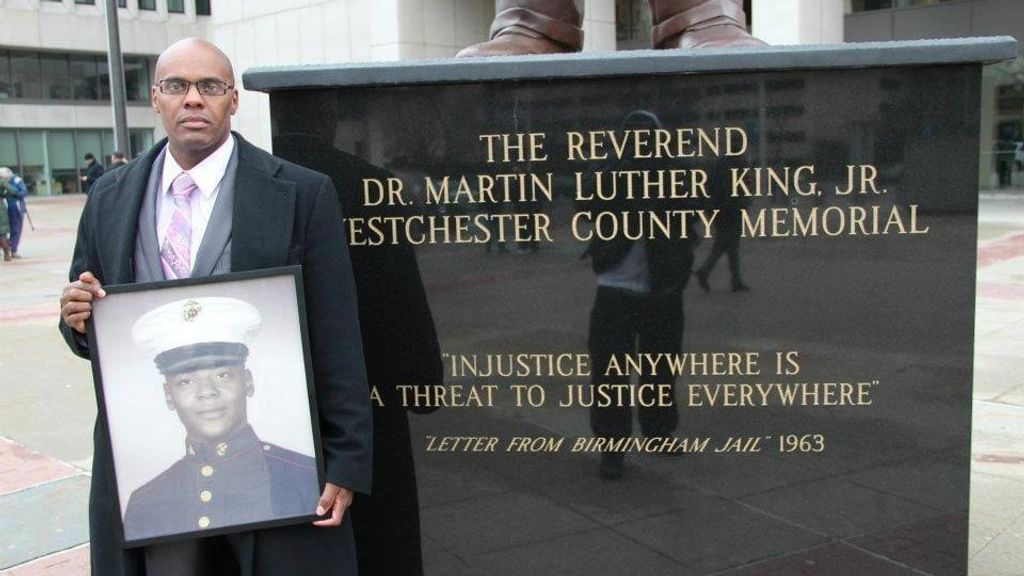 The burden that Kenneth Chamberlain Jr. and the Chamberlain family have carried has now hit a decade. Kenneth Chamberlain Sr. was fatally shot by White Plains police officers following an inadvertent Life Alert activation that led to cops being dispatched for a welfare check on him on Nov. 19, 2011.

The film, “The Killing Of Kenneth Chamberlain,” produced and directed by David Midell, provides insights into the events that led to Chamberlain’s death. While the award-winning film sheds light on the situation, Chamberlain’s son and namesake continues to push for accountability from the city and the officers involved. No criminal charge was laid against the police officers involved.

In June 2020, the Second Circuit of Appeals ruled a federal judge was wrong to dismiss parts of a lawsuit against the police for excessive use of force.

Kenneth Chamberlain Jr. opens up about his father’s killing, gives his thoughts on the film, and explains his perfect case scenario in the aftermath of his father’s death.

Zenger: When I spoke with David Midell about the film “The Killing Of Kenneth Chamberlain,” he told me that you felt it was too late to get justice for your father, but instead, you were seeking accountability. Could you elaborate on that?

Chamberlain Jr: Yes, that was the conversation that I had with him. A lot of times when I speak with people, the question that they ask is, “What does justice look like for Kenneth Chamberlain Jr? What does justice look like for Kenneth Chamberlain Sr?” And I say, after a decade-long fight and still fighting, there is no such thing as justice because justice is immediate. So, I said the only thing we can hope for now is some sort of accountability in his killing. That’s what I will continue to push and continue to fight for.

Zenger: There are no signs of you giving up this fight, but I’m sure this has been an exhausting process for you?

Chamberlain Jr: Most definitely. There are times where I get zero sleep. You still have your personal life and that you have to lead even in the mist of all this. But that’s what these governments are hoping for. That you become so exhausted that you shut down, you say you can’t do it anymore. You need a strong core group of people who can help push you on those days that you feel like you just want to stop.

Zenger: Was it difficult to watch the movie?

Chamberlain Jr: It takes me on a rollercoaster ride because Frankie Faison does such an excellent job of portraying my father. It’s like I was looking at him, even when I was on the movie set. It’s just that powerful, and each time I have the same reaction, especially at the end. The tears will start to fall.

A lot of that is due to the fact that there has been no closure. There’s been no accountability. And with no accountability you can’t have closure. We have a city that’s still continuing to refuse to admit any type of wrongdoing in his death. Of course, when we watch this film, it just brings up those feelings. Even if we hear about another killing, it brings up those feelings, because we’re dealing with trauma now. I tell people, trauma is very real. I actually apologize to people when they watch the film, and they say, “Why?” And I say, “I want to apologize for any trauma that this may trigger in you.”

Zenger: The most disturbing issue for me was this situation could have been handled so differently. The actions that led to your father’s killing, and the way things are being handled now could be handled better.

Chamberlain Jr: Yes definitely. Police officers sometimes forget that their job is to defuse a situation and not create one. In this particular situation, they did everything… I always say, it wasn’t a crime until they made it one. When he said he was OK, they could have left it alone right there.

I was speaking to someone who watched the movie and they said, “This movie could have been over so many times already.” The first time he said “I didn’t call you.” That is the feeling with that it could have been handled so many different ways, and that’s something else that we are pushing as well. How do these officers respond to mental health calls, and not having an armed response to someone who is in a mental health crisis?

Zenger: I did not know your father, but I feel Frankie Faison through his amazing acting abilities made us feel like we knew Mr. Kenneth Chamberlain Sr. To see the product he put out, how did his performance make you feel?

Chamberlain Jr: Surprisingly enough, he didn’t get any insight from me. He didn’t ask me one thing about my father. He read the script. Now, David [Midell] definitely got information from me about my father, especially surrounding the killing. All the information he received is available through freedom of information. So, it’s not like he was given anything that was confidential.

Zenger: I love the attention this film is receiving and all of the awards it is generating because it continues to shed light on your father and the unjust treatment he received, as well as the obstacles you faced in seeking accountability.

When people say they didn’t know about the case or the killing, I say, “Yeah, because the city of White Plains was almost effective at doing their job.” They didn’t want you to know. Had I not been as relentless as I am, you wouldn’t know about him. Again, that is part of the playbook that they use. They want to overwhelm families, they want to drag things out in court, and by the time they decide to sit at a table or discuss things with you, or make you believe that they will be some type of accountability, the statute of limitations is up, so you can’t do anything (laughing).

Zenger: I am sure you have upset a lot of people along the way because you are relentless in your pursuit.

Chamberlain Jr: Yes. That’s why I often introduce myself by saying, “My name is Kenneth Chamberlain Jr. I am a hero to some and troublemaker to others.” It depends on what side of the fence you’re standing on.

Zenger: Was listening to the Life Alert audio and actually hearing your father’s voice one of the more difficult parts of watching, “The Killing Of Kenneth Chamberlain?”

Zenger: And he could sense that it was going to end badly.

Chamberlain Jr: Yes… and one thing that he did that was smart, if you listen to the audio, he was detailing everything that was happening to him. He was telling you, “Oh, they got shotguns ya’ll. They got tasers. They are coming in here to break in here and murder me.” And that’s exactly what happened.

Zenger: In a perfect world, what would be the end result of your mission and what you’re pushing for right now?

Chamberlain Jr: Wow! A perfect world, I would have my dad back and we would all live happily ever after. … But outside of that, as far as the film goes, if nothing else, let it be a teaching tool of what not to do.

I also want to really force real dialogue. I don’t want to look at trainings and stuff like that because that’s usually the knee-jerk response when things like this happen. “We’re going to give our officers more training.” No! What we need to see is accountability. That means, the same way they would charge you and I if we were to commit an egregious act like that, they would charge the officers the same way. That would be my perfect world.