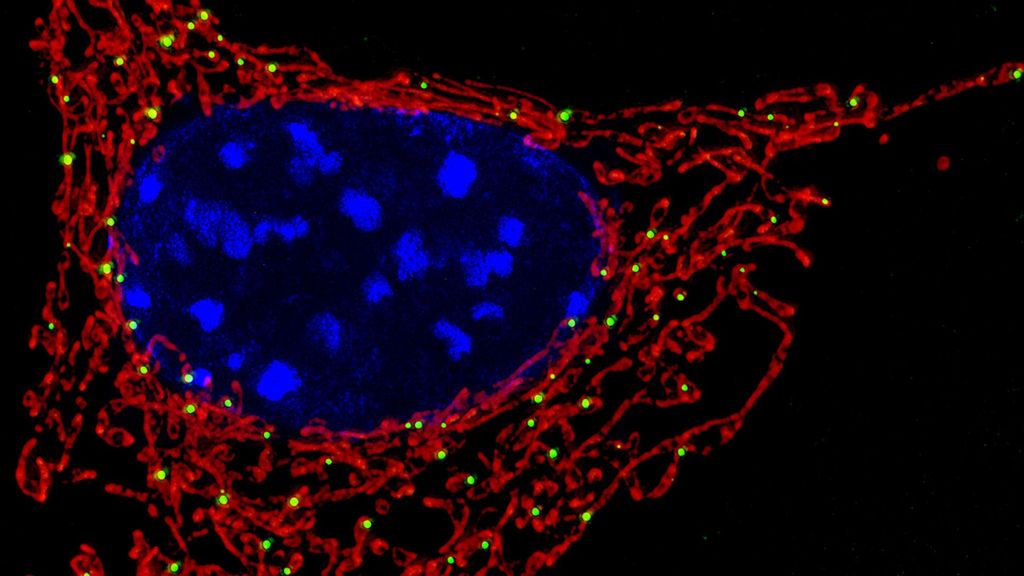 WASHINGTON — Mitochondria, the powerhouse of the cell, may actually be beneficial when split into fragments, according to new research.

It demonstrates how a protein associated with Parkinson’s disease can damage the mitochondria, organelles inside cells that carry out a medley of vital tasks. These structures generate energy and regulate the interiors of a cell to maintain a state of healthy equilibrium.

The findings of the study were published in the journal ‘Cell Death and Disease.’

The findings come from experiments in which fruit fly larvae were genetically engineered to produce unusually high amounts of the protein, called alpha-synuclein.

“When fruit fly larvae expressed alpha-synuclein at elevated levels similar to what is seen in Parkinson’s disease, many of the mitochondria we observed became unhealthy, and many became fragmented,” said Shermali Gunawardena, associate professor of biological sciences at the University at Buffalo College of Arts and Sciences.

“Through detailed experiments, we also showed that different parts of the alpha-synuclein protein seem to be responsible for these two problems and that fragmented mitochondria can actually be healthy.

“This is a key finding because before, people thought fragmented mitochondria were unhealthy mitochondria.”

The results could be of interest in the context of drug development, as abnormal aggregates of alpha-synuclein in brain cells are a hallmark of Parkinson’s disease, and mitochondrial damage has also been observed in patients.

“This research showcases the advantage of using fruit fly larvae as a model organism to study how neurons become damaged during devastating diseases such as Parkinson’s disease,” T.J. Krzystek, a University at Buffalo doctoral candidate for biological sciences, said.

“Through this approach, we pieced together a new understanding for how the Parkinson’s disease-related protein alpha-synuclein disrupts the health and movement of mitochondria — the epicenter for energy production in cells.

“We believe this work emphasizes a promising path that can be explored for potential therapeutics aimed at improving mitochondrial health in Parkinson’s disease patients.”

Krzystek and Rupkatha Banerjee are the co-first authors of the study. Banerjee is a postdoctoral research associate at Scripps Research who completed her doctorate in biological sciences at the University at Buffalo. Gunawardena is the senior author.

The research was a collaborative effort, with many members of the Gunawardena lab making significant contributions.

Through tests in fruit fly larvae, the scientists could tease out intricate details regarding interactions between alpha-synuclein and mitochondria.

In particular, the study not only concluded that different sections of the alpha-synuclein protein are likely responsible for causing mitochondrial fragmentation and damaging mitochondrial health; the research also identified these sections and described how other proteins might interact with them to drive these changes.

“Mitochondrial impairments have long been linked to the pathogenesis of Parkinson’s disease,” Banerjee said.

“However, the role of alpha-synuclein in mitochondrial quality control so far has not been comprehensively investigated.

“Our study unravels the intricate molecular mechanisms by which the different regions of alpha-synuclein exert distinct effects on mitochondrial health, bringing into light a potential pathway that could be targeted for exploring new therapeutic interventions in Parkinson’s disease.”

The biology professor Gunawerdena explained how the research team tracked the mitochondrial response and behavior at high alpha-synuclein levels.

“We were able to tease out specific mechanistic functions for alpha-synuclein by using imaging tools and a color-tagged marking system to observe the process of what happens to mitochondria when alpha-synuclein is elevated,” Gunawardena said.

“This system allowed us to observe the health, size, and the movement behaviors of mitochondria at the same time in living neurons in a whole organism.”