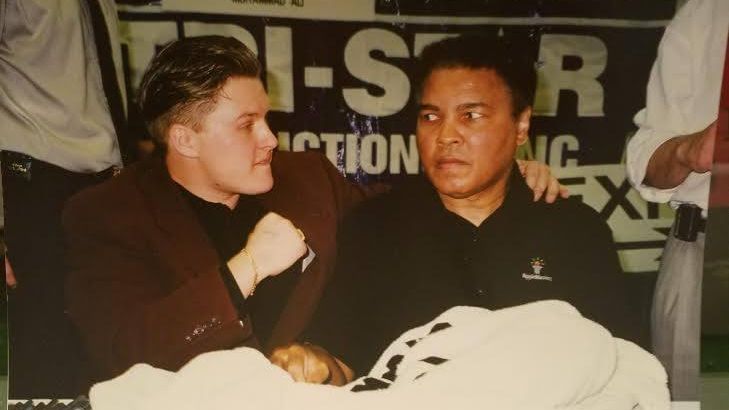 Ken Burns’ documentary on Ali, tracing his rise from boxer Cassius Clay to heavyweight champion, premiered in 2021. Now, Troy Kinunen, Mears Online Auctions CEO, who built one of the most comprehensive Muhammad Ali collections, is selling his treasures of the boxing legend.

It took 30 years to amass — and the collection will be available to fans from July 21-23 via Heritage Auctions.

Bidding has already begun with 1,600 personal items of “The Greatest of All-Time,” the three-time heavyweight champion. Coveted items such as robes, mouthpieces, pictures and his Muslim prayer cap will be available.

Kinunen started his collection hunting Babe Ruth and Mickey Mantle items, but found some of them out of his price range as a young man. An affordable Muhammad Ali poster prompted his collection and piqued his interest in the fighter.

Kinunen talks to Zenger about his impressive collection of the self-proclaimed GOAT (Greatest of All Time).

Muhammad Ali’s robe was worn for one of his memorable fights against rival Joe Frazier. (Heritage Auctions)

Zenger: From July 21-23, you will be auctioning off some of the rarest Muhammad Ali items available. How did you get behind Muhammad Ali?

Kinunen: Muhammad Ali is the original GOAT. A lot of people want to call themselves the GOAT, but he was the first and, in my opinion, the only. I’ve been a collector my entire life. I was trying to figure out what I wanted to collect and who, I went to a show, and found a poster of Cleveland Williams. It wasn’t one of his biggest fights, but it was Muhammad Ali vs. Cleveland Williams. I started doing some research on Ali, bought some books at the time, and the more I read, I became enamored with his message and his life.

I was 18 when I started collecting him. I was a Mickey Mantle and Babe Ruth fan. I couldn’t afford a lot of that stuff, so I found that poster. I didn’t buy that poster and say to myself: “I’m going to have the greatest Muhammad Ali collection.” That came after I met him at the first autograph signing. I was at UWM [University of Wisconsin-Milwaukee] at the time. I was with a friend who played on the basketball team, Darryl Arnold. There were no selfies back then, so I brought him with me, so I could be in the picture.

He was a basketball player, so he was a big guy, and Ali jumps up, he points to Darryl and says, “Hey you, you look like Mike Tyson.” He puts up his fists, and he says: “I want to fight Mike Tyson.” He let me come back and take a picture with him, he talked to me, did the “Ali Shuffle.” It was just special. That was the moment where I thought: “This is the guy I’m going to collect.”

Zenger: What are some items you will put up for auction?

Kinunen: The auction is being conducted by Heritage Auctions. They’re out of Dallas, Texas. We’re accepting bids now. You can see the entire 1,600-piece set that is up for sale right now on the website www.ha.com.

Zenger: How do you gauge when it’s time to put an item up for auction?

Kinunen: There are a lot of factors that go into that decision. As a collector, you want to sell at a good time. The first thing that helped me decide to sell was, I collected for over 30 years, I had everything in storage. As I’m looking over it again, I realized I put together an amazing collection. I wanted it displayed properly and enjoyed. Also, really rare stuff is desirable now.  Ali’s stature continues to grow. He means a lot to a lot of different people. I can’t do his legacy justice.

Zenger: Not necessarily in a dollar amount, but what is your most priceless Muhammad Ali piece?

Kinunen: One piece that is near and dear to me is the Tunney Hunsaker poster. That was Ali’s pro debut. I got that poster out of Louisville. It was sponsored by Kroger’s grocery store. It’s a picture of him, it says: “Help a crippled child walk, attend the Louisville boxing spectacular, Cassius Clay vs. Tunney Hunsaker.” He’s right next to a big picture of round steak for 75 cents a pound and above the chili beans. In 1960, he had won an Olympic gold medal, but he wasn’t that big of a deal in the pro ranks. The picture of the round steak got bigger billing then he did.

Zenger: Scams and fake items have become prevalent on the internet. How important are your authenticity procedures?

Kinunen: Whenever you’re dealing with collectibles, authenticity is No. 1. It has to be real, or you’re spending money on stuff that can’t be verified. My collection, I bought a lot of my stuff directly from the source. I bought it from people that were his friends, people in his camp, his trainers. We have a lot of letters of authenticity to state the origin. Then we have third-party experts look at the autographs, the programs, the tickets and original photos and authenticate them.

Even though I knew the stuff was real, I wanted everybody to know it was real. I’m providing a letter of authenticity stating that it came from my collection. It’s got a lifetime guarantee. We went above and beyond. 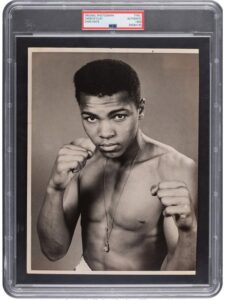 Zenger: Do you have a favorite Ali moment or story?

Kinunen: I do. I’m in Milwaukee, and he made an appearance in Madison, Wisconsin. He was still healthy enough where he could talk. It was kind of in a whisper. He would sign autographs, but you could see he was declining. I had gone through the line, got a few things I had collected signed, which I always liked to do. But I didn’t leave the show. I just watched him interact with the fans. It’s getting to the end of the signing session, and he’s starting to doze off. He was tired. All of a sudden, a door slams. I looked, and this African American kid had snuck in the back door of the auditorium. As soon as he’s in, this security guard runs across the room to kick him out. It causes a commotion, and Ali sees what’s going on.

Ali stands up, and he points to this kid and calls him over. He waves the security guard off. The little boy starts crying. Ali says, “What’s wrong? Why are you here?” The kid says, “I live in a foster home. My counselor is a big fan of yours. He gave me his magazines, we watched videos together, and I grew to love you because of what my counselor taught me about you. You’re my hero.” Ali pats him on the head, puts up his dukes, and he does the Ali Shuffle. Ten minutes prior, he was falling asleep in his chair. He found the strength to move around like he was in his prime for that little boy.

I have never seen anything like that in my life. I have been around so many professional athletes doing these signings, there ain’t nobody like that. I met Michael Jordan, but he was just another autograph. He wasn’t Muhammad Ali.