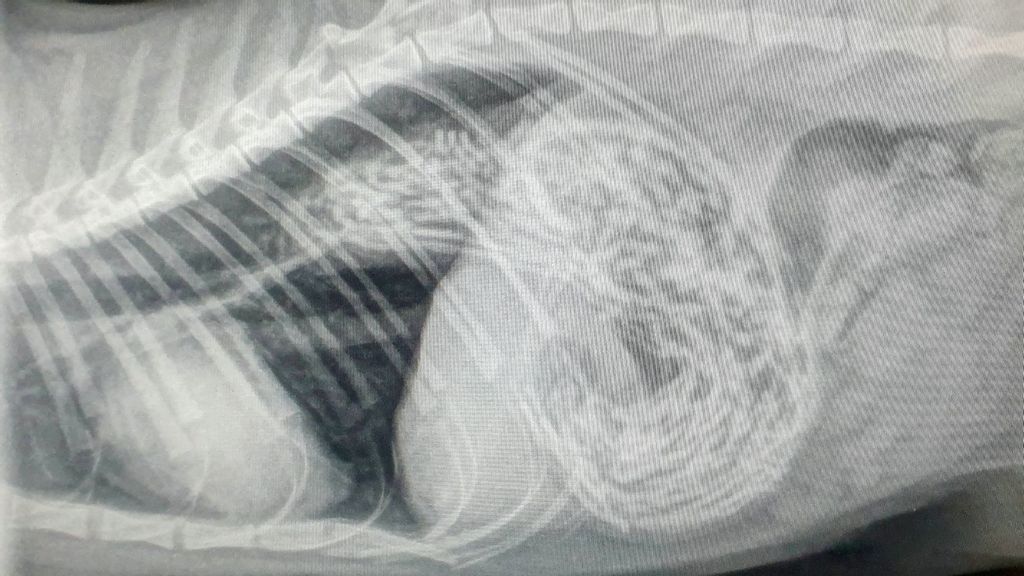 A greedy cat was rushed to the vet for life-saving surgery after eating 50 hairbands which had formed a massive lump in her stomach.

Paul Spraggett, 44, says he had no idea his two-year-old cat Berry had been scoffing hair ties for 18 months.

The factory manager rushed Berry to get professional help last month after she stopped eating and started being sick.

He initially thought his pet had a fur ball but was “stunned” to find the large growth was a clump of 50 hairbands after an X-ray.

The cat had a three-hour operation to remove the foreign objects at the Willows Veterinary Centre and Referral Service in Solihull, which is located in the West Midlands, in the United Kingdom, and it has now made a full recovery.

Paul, dad to two daughters, says hairbands are now banned from the family’s home in Stratford-upon-Avon, which is located in Warwickshire, also in the UK.

He said: “None of us had ever thought about the risks that hairbands and similar everyday objects could pose for our four cats.

“We were really shocked to find out that was why Berry had been so sick and that’s why hairbands are now banned from anywhere the cats might go in the house.

“Willows told us they’d had other similar cases in the past, although not involving anything like the amount that Berry had swallowed, which is why we want to highlight this case to try to prevent it happening again.

“We’re so grateful to have our lovely cat back and she’s certainly loving being back, too.

“She’s racing around with her brother and has really come on and grown since the operation.

“She’d always been much smaller and thinner than him but now there’s not much in it at all.

“The main difference was that he had always wolfed his food straight down, while Berry
was more of a grazer.

“She’d eat a little and then come back for a little more later.

“Now she has much more of an appetite and that’s convinced us that she must have been snaffling these hairbands over a long period of time, maybe even 18 months.

“We think they gradually accumulated, filling her stomach and that’s why she could only eat her food in small portions.

“Finally, her stomach was so full it made her ill.”

Graphic X-rays show the hairband lump was lodged between Berry’s esophagus and her stomach, making surgery the only option.

Vet Jo McKendry said: “Berry arrived having suffered acute vomiting the night before and she now wasn’t eating or drinking.

“She behaved like she was trying to vomit up a fur ball but was struggling to bring it up.

“She was clearly dehydrated and when I examined her, I felt a large sausage style structure in her cranial abdomen which was confirmed by x-rays.

“The images showed a foreign body extending from Berry’s stomach into her distal esophagus – and it appeared to be a mass of hairbands.

“I performed a gastrotomy (surgical incision into the stomach) to access and remove the bands, and Berry was allowed home the following day.

“She was quickly back to normal, showed a massive increase in appetite and was soon putting on weight.”