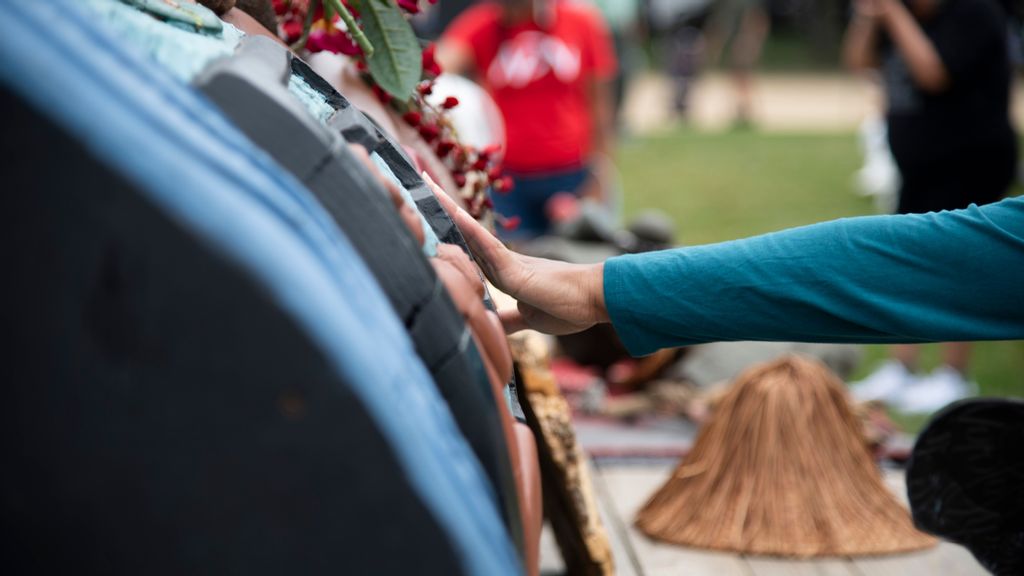 WASHINGTON — By carrying a 25-foot-long and 5,000-pound traditional totem pole some 20,000 miles from Washington State to Washington D.C., members of the Lummi Nation wanted to deliver a message: when public works are forced upon their sacred lands, the burden they bear is heavy.

The Pacific Northwest indigenous nation’s “Red Road to D.C.” journey finally reached the nation’s capital on Thursday after two weeks and eight stops at sacred sites threatened by oil and gas pipelines and other infrastructure.

Speakers throughout the afternoon spoke about the links between environmental conservation and their culture and heritage, as well as the oppression of Native American people in the centuries since the European colonization of North America.

They also spoke about the devastation wrought upon their lands by public works projects, including oil pipelines.

One speaker, the Woman Who Stands In The North, said the devastation was often twofold: people were forced to witness the destruction and pollution of ancestral lands with no recourse to fight back, and were then left to deal with the physical consequences of the damage. As an example, she cited Enbridge Line 5 — a pipeline that shifts petroleum from the west to the east of Canada, through the Great Lakes.

“Just as we rely on water for our livelihoods, we also understand in our teachings that as women, as water protectors, as water carriers, that we rely on water to give birth to those next seven generations,” she said. “Enbridge Line 5 has spilled more than 1.1 million gallons of oil and natural gas in the state of Michigan since it was implemented.”

It was a message mirrored by many at the event, with most decrying the simultaneous spiritual and environmental harm caused by the construction of large projects on their ancestral lands.

As the 5,000-pound totem traveled across America, it “collected” the prayers, intentions, and spirit of the lands and people who work to protect their Native lands. At the event on Thursday, many of the same people wore traditional clothing, proudly representing the communities they came from and calling for lawmakers on Capitol Hill, including Haaland, to pay more attention to their plight.

In an exclusive interview with Zenger, Jamie John, a member of the Anishinaabe nation and one of the people who welcomed the Lummi Nation into the Michigan Mackinac Straits during the national tour, said he believed that it is a matter of when — not if — the Enbridge Line 5 leaks once more.

But he said he also holds out hope the land would one day return to his nation.

He voices, “I want indigenous lands to be looked after by indigenous people. I want us to be the stewards of where we had lived for hundreds of years. I want our sovereignty respected and implemented by policy makers. As simple as it sounds, I want land back. We want our land back.”

The totem, meanwhile, also carries with it hope: as indigenous people see more representation in government, it is possible that those dreams and prayers may eventually become reality.