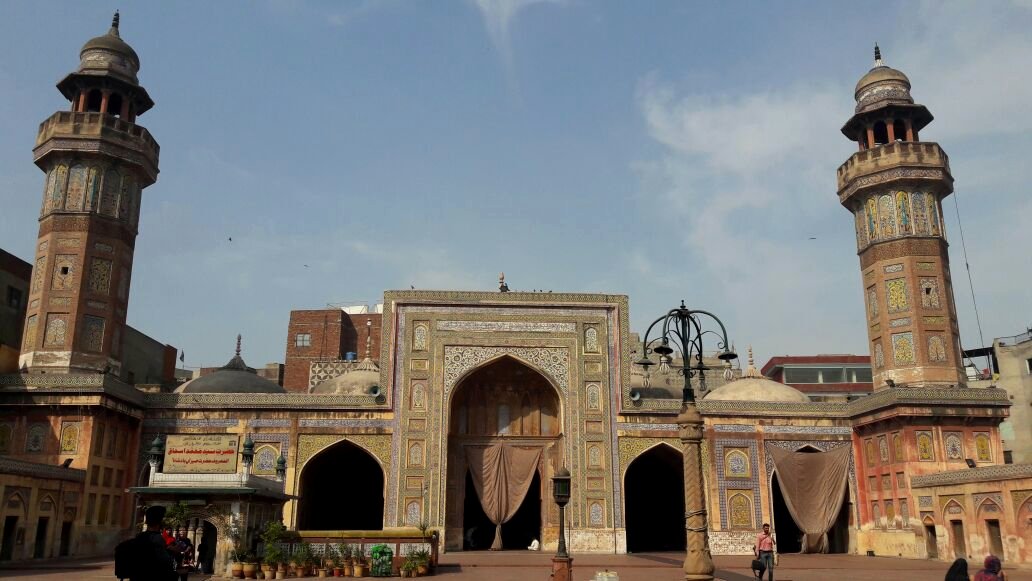 Pakistan actress Saba Qamar and singer Bilal Saeed are facing the country’s formidable blasphemy laws and heat from Islamic clerics for shooting a music video in a historic mosque.

Qamar, who had a leading role in the film “Hindi Medium” and several TV sitcoms, posted a picture on Instagram with Saeed on Aug. 1 taken at the 17th-century Wazir Khan Mosque, in Lahore, about 230 miles south of Islamabad.

The picture’s caption: “Qabool hai” — the Islamic “I do” in wedding rituals.

Social media was abuzz with speculation of the actress and the singer tying the knot, only to learn later this was part of Saeed’s new song “Qabool.”

There was an immediate backlash, with many demanding the duo be punished for offending religious sentiments.

Lahore police lodged a case against them on Aug. 13 under section 295 of the Pakistan Penal Code, which aims to punish a “deliberate and malicious act intended to outrage religious feelings of any class by insulting its religion or religious belief.”

If convicted, Qamar and Saeed could face prison time.

“The maximum punishment under this subsection of the law is imprisonment for two years or fine or both,” lawyer Zain Naqvi said. “This is different from sub-section 295C for which punishment is death.”

Worse, Qamar’s life could be at risk after radical cleric and Tehreek-e-Labbaik Pakistan Chief Khadim Hussain Rizvi in a public meeting on Aug. 14 demanded action against her and Saeed.

“Don’t you know the protocols of mosques?” asked Rizvi in the meeting. “Register a case against those responsible for what happened.”

Rizvi was among the clerics who justified the assassination of Salman Taseer, former Punjab governor.

A police officer on to the governor’s security detail opened fire and killed him in Islamabad on January 4, 2011. Rizvi had then said that since the governor had called the blasphemy law a “black law” his killing was justified.

Blasphemy laws in Pakistan were introduced in the colonial era in British India – which included the territory that is now Pakistan – with the justification of preventing and curbing religious violence between Hindus and Muslims.

Under the military government of General Zia-ul-Haq (1977-1988), additional laws were introduced against blasphemy specific to Islam. Today, the most frequently invoked blasphemy laws in Pakistan’s Penal Code are those against outraging religious feelings, desecrating the Quran, defiling the name of the Prophet Muhammad and defiling the names of the family of the Prophet Muhammad, his companion or any of the caliphs.

Blasphemy laws in Pakistan — a Muslim-majority nation — have been criticized internationally for being used to target religious and social minorities.

“The systematic enforcement of blasphemy laws …  severely restricted freedom of religion or belief,” claims a recent report on Pakistan by the United States Commission on International Religious Freedom.

Amendments to the code in 1986 under the rule of military dictator Muhammad Zia-ul-Haq are an “elaborate facade for the ongoing persecution of vulnerable individuals and the reign of the violent extremist idea,” according to a paper published earlier this year by the European Foundation for South Asia Studies.

The report also identifies vigilante justice against religious minorities as one of the major outcomes of the blasphemy laws.

After the outrage, Qamar and Saeed took to social media to explain what had happened and apologized for hurting religious sentiments.

“The impression was created that we danced … inside the mosque and desecrated the holy place,” Saeed said later in an Instagram video. “I am a Muslim and raised in a Muslim household. I swear to God that we did not dance and play music inside the mosque.”

“We realize that we committed a mistake unintentionally. We ask God for forgiveness,” he added. “We apologize to you also and request you to let it go.”

Qamar also took to Twitter to explain what had happened.

“There is only one sequence that was shot at the historic Wazir Khan Mosque,” Qamar said. “It’s a prologue to the music video featuring a nikah (wedding) scene. Despite this if we have unknowingly hurt anyone’s sentiments we apologize to you all with all our heart.”

The song went viral on social media after being uploaded to YouTube on Aug. 12. Since then it has had 4 million views. The scene shot at the mosque is missing from the video.

Saeed had claimed, in his Instagram video, they had sought official permission from the Auqaf and Religious Affairs Department of the Punjab province. A letter has also emerged, which shows that they were given permission to shoot at the mosque for a fee of $177.

He added that one official of the department had been sacked for granting permission and an inquiry had been ordered.

“Such shoots or any kind of recording within mosques premises is prohibited,” said ul Hassan. “Only shooting for documentaries is allowed. Sanctity of mosques is the priority.”

The Wazir Khan Mosque was constructed in 1634 under Shah Jahan, the fifth ruler of the Mughal dynasty, which ruled major parts of South Asia from the 16th to the mid-19th century. Shah Jahan also funded the construction of the Taj Mahal in Agra, India.

The controversy over the shoot could also adversely affect Qamar’s career, said sources in the film industry.

“The shooting of a film in which she stars was supposed to start in March but was delayed because of the Covid-19 pandemic,” said film critic Hassan Kazmi. “The producer of the film is now not very sure if the shooting will start on schedule after the recent controversy.”